The objective of this research is to compare prices of 3 European low-cost carriers for the flights departing from 10 busiest Italian airports .

We will present key information about flight prices for all three airlines. This may help travellers from Italy to find optimal flights and the best moment to purchase tickets.

The dataset in this research contains the data for 165 routes with departure from one of these airports. All observations were made daily during the period of May 2015 - February 2016 for the departures in May 2015 - October 2016.

The following airports were included:

Best time to book a flight

We have aggregated all the prices to see how many weeks to departure the prices are the lowest (on average).

There are some differences per departure airport. The below examples compare the cheapest fares for Ryanair departures from three airports.

How often do prices change

This will show how frequently each airline changes their prices. We compared prices daily to see whether one of the following occurred: no change, drop or raise. The results for each airline are presented in the following charts.

Ticket prices of Vueling are the most volatile and change approx 22% of days. In other words if you track prices daily this is the probability you will see prices changing. Vueling is also the most aggressive in raising prices. In 12% of observation prices went up, which could make potential buyers more doubtful and force to buy early.

Ryanair is comparable to Vueling in terms of price change frequency.

EasyJet prices are the most stable and in 86% of cases do not change on daily basis.

There is no significant difference in price changing patterns between departure airports.

How much do prices change

These stats show how much a traveler can save or lose when waiting for better fare. We have checked what is the average % of each price drop or raise. This shows the potential risk of waiting for a cheaper fare. Also it shows what could a potential reward be in case price goes down.

Ryanair prices increase the most day to day and the cost of waiting is on average 27% most expensive airfare. Waiting is also potentially more rewarding and the average price drop reaches 18%.

EasyJet and Vueling have smoother price changes in the range of 10-15% and there is no such a difference between increase/decrease amounts.

However if you compare absolute value (in EUR) of price change, Vueling price changes are the most costly since their overall price level is somewhat higher on the selected flights.

There is no significant differences in change amount pattern between departure airports.

We take all historical price drops and see which days of week they occur on. It shows which days are the best options to find good price deals for each airline.

The charts below show the distribution of price drops between days of week for each airline. Here the differences between three low-cost carriers really stand out.

Price drops are quite evenly distributed between days of week, with slightly higher chance for deals on Thursday and Fridays and much lower on weekends. 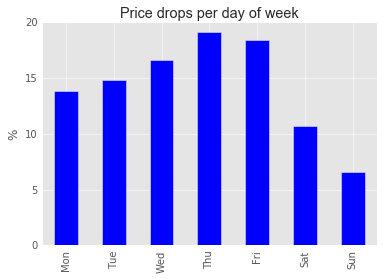 Surprisingly by far the highest number of price drops were found on Saturdays. 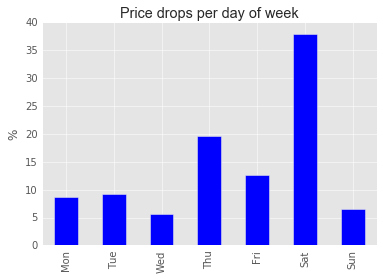 Highest ratio of price drops observed on Monday and gradually decreasing throughout the week. The likelihood of finding deals on weekend is close to zero. 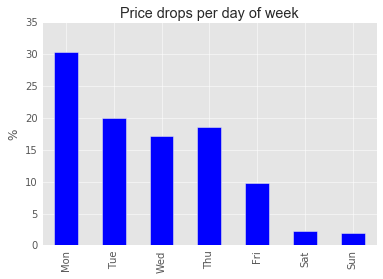 In this study we analyzed airfares for flights from 10 busiest Italian airports served by 3 low-cost carriers: Ryanair, EasyJet and Vueling. The study has discovered important differences between these airlines in terms of price changes. These insights may help travellers choose the best time book flights for each carrier.

We performed deeper analysis separately for each of the airports, but there were no significant deviations found from the overall findings.