The objective of this review is to follow the price evolution of a single flight on a given departure date. In addition, the accuracy of AirHint flight price predictor algorithm is assessed using the concrete flight.

Ryanair flight FR6266 from Edinburgh (EDI) to Barcelona (BCN) with the departure on 28 February 2015 was chosen for the purpose of this analysis. The flight price was tracked daily from 1 October 2014 to one day before departure. The evolution of the price can be seen in the following chart.

It can be observed that the price for this Ryanair flight ranges from 24.99 to 171.99 pounds. It moves slightly up and down, but generally remains flat until January 14. At that moment, 44 days before departure, price starts climbing to reach its peak 9 days before departure.

Next for each observed day, the right after the fact decision was computed. For example, on 1 October 2014, the price was £39.99. The best decision at that moment was to wait for cheap fare until price drops to the cheapest. In another example, on January 14, the best possible decision was to book at £39.99 since later the price only went up. An extract from the table is shown below.

The eventual goal of the study is to check whether it is possible to predict future price evolution and recommend the correct booking moment. For that purpose airhint.com suggestions were used. For each observed day, the service provided Wait/Buy recommendation. This artificial suggestion was compared to the real outcome. The results are presented in the following table, where correct predictions are marked green and misses are red. 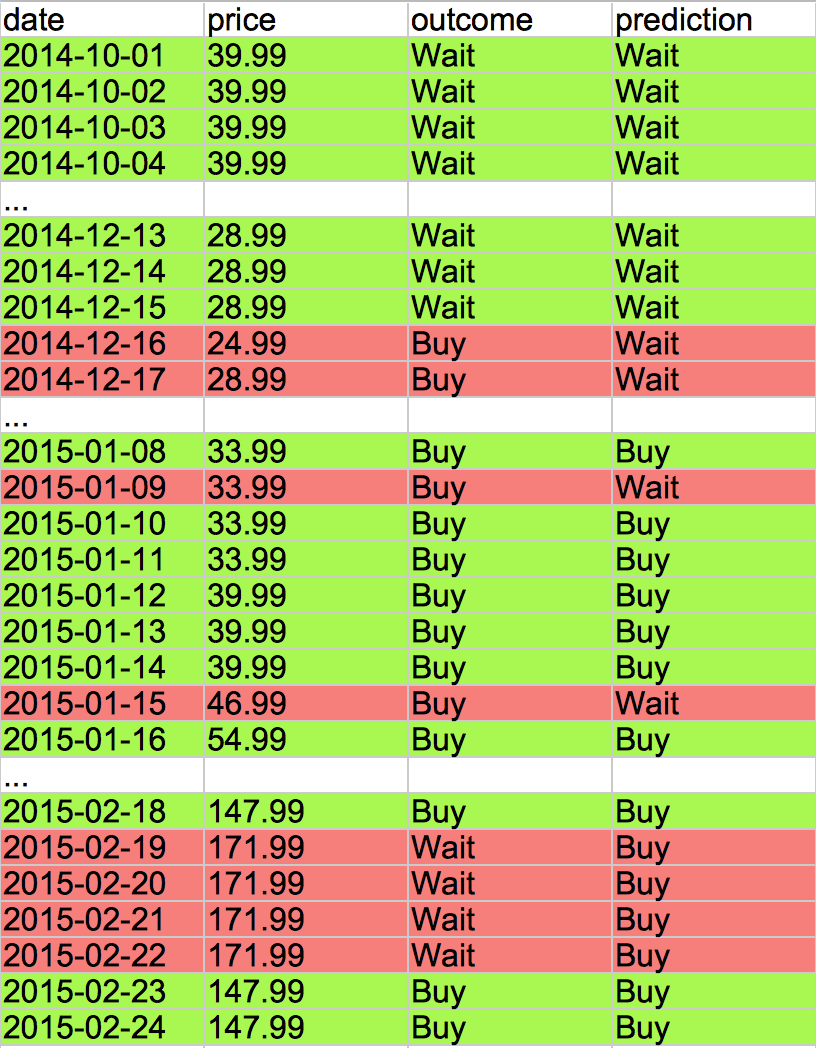 The total accuracy of predictions for this Ryanair flight was 78%. In fact looking at observations made up to 75 days before departure, the predictions were 100% accurate. In those cases “Wait” was always predicted which turns out to be the best strategy so early before departure date.

The results show that in practice it is possible to make fairly accurate flight price predictions. Obviously the accuracy is far from perfect, but is high enough to be used as an extra signal when making purchasing decisions and finding the best moment for booking a Ryanair flight.